It is not recommended to uninstall .NET Framework.  In some given circumstances, there may be a requirement to remove/re-install .Net Framework on Windows Server 2012/2012 R2.

When you uncheck the .NET Framework 4.5 checkbox in the Remove Roles/Features Wizard of Server Manager, Windows will check all roles/features that may also be installed as it would need to be removed as well..  If there are other roles or features dependent on .NET Framework, those would be listed in this additional window. 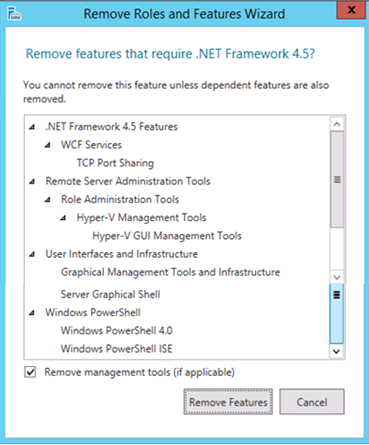 If you read through the list, the components that are affected by this removal are listed as follows:

If you were to use Remove-WindowsFeature PowerShell cmdlet, you can add the –whatifswitch to see the list of features that would also be impacted.

Unfortunately, we all get in a hurry sometimes and we do not read through the list and click “Remove Features”. If you notice – the “Server Graphical Shell” and “Graphical Management Tools and Infrastructure” are part of the features being removed.

Here is a sample output from running Remove-WindowsFeature Net-Framework-45-Features -WhatIf. Again you will see that removing .Net Framework will effectively also remove the following:

The two key features that I wanted to point out are:

As stated earlier, this will leave the server without a graphical shell for user interaction. Only the command prompt will be available post reboot.

If you get into this situation, run the below commands in the Server Core’s command prompt window to help you recover:

The above commands will re-install .Net 4.0 and PowerShell on the server. Once PowerShell is installed, you can add the Graphical Shell (Windows Explorer) using the following command:
Path to Powershell.
C:\Windows\System32\WindowsPowerShell\v1.0

Once the GUI Shell is installed, you will need to restart the server with the following command:

We hope this information was helpful.