When a PXE failure occurs it helps to be very precise with the step it failed at. The place at which a PXE build fails can tell us where to investigate.

Some possible causes of error in a PXE build are:

On the server side there’s one log file that will help you immensely. If you have set up the PXE Service Point on the site server it can be found at:

Or, if you have configured another server as the PXE Service Point it will be found at:

in the root of the drive SCCM is using.

Using Trace32 to view this log file can give you realtime information on the PXE boot process. However, the first error we’ll look at won’t even show up in this log.

PXE-E51: No DHCP or proxyDHCP offers were received

The most common PXE error I see is PXE-E51. The first indication that something is wrong is when you see

and you get more than three or four dots. 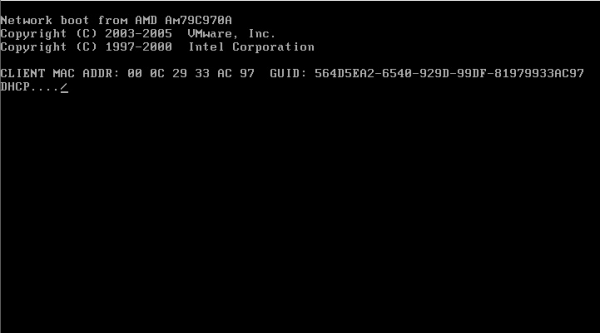 The PXE process fails at this point with PXE-E51: No DHCP or proxyDHCP offers were received. 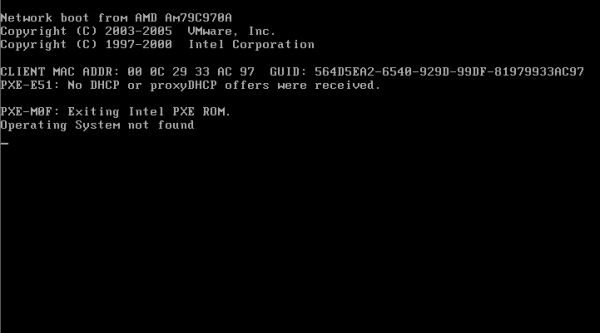 This error basically says that the machine can’t obtain an IP address. Possible reasons for this include

Most of these problems are easy to check, or are easy for your networking people to check. Once the problem is fixed the PXE boot process works properly in most cases. Assuming your network is configured to allow PXE booting this error normally means one of two things – the cable is faulty or there’s no DHCP reservation/the DHCP pool is exhausted.

This error highlights the need for preciseness in the error reports from your technicians. Since there’s so much more that can go wrong at this stage, it’s nice to have an error which is relatively easy to fix.

Assuming your client gets an IP address, there is still a large number of ways for it to fail before you even get an abortpxe.com message. PXE-E32 TFTP open timeout can be a frustrating message – but it does at least give you a clue where to look.

This error means that your client machine can’t access the TFTP daemon running on your PXE Service point. Assuming your PXE Service Point is set up correctly (check the WDS service is running), the most common reason for this message is network filters/firewall settings. Fortunately, Microsoft provide a document which lists what ports need to be open for the TFTP daemon to work. Read this document carefully, you need to open more than just ports 69 and 4011 to get this to work. The daemon listens on port 69 but responds on a randomly chosen high port. You’ll need to configure the network filter rules to allow this behavior before TFTP will work.

You might also see this error if DHCP is misconfigured. If you have DHCP and the PXE Service point on different servers then you’ll need to set option 66, the Boot Server Host Name. A small tip here – use the IP address of the PXE Service Point when troubleshooting this setting – this removes the possibility that it’s a DNS resolution issue. You can always set it back once you’re happy everything is back working.

Check option 67 on the DHCP server. It should be something like

Also verify that the Task Sequence is deployed to the computer object, and the collection is working as intended.

PXE-E55: ProxyDHCP service did not reply to request on port 4011

Related to the TFTP timeout problem, this suggests a firewall or routing issue. Check the firewall settings allow 4011 UDP through.

At this point we know the client is getting service from DHCP and has managed to find the TFTP server and request the boot file. Two things to check here are

The missing boot files can be fixed in a number of ways. The easiest way is to just copy the correct files over from a working PXE Service Point. I would not recommend this though – the files are missing for a reason, and you should really fix the underlying cause.

This error can be caused by a number of things- updating drivers in the default OSD Boot Images, restarting the server hosting the PXE Service Point or just a botched PXE Service Point install. The first thing you should try is clearing out temp files used by PXE.